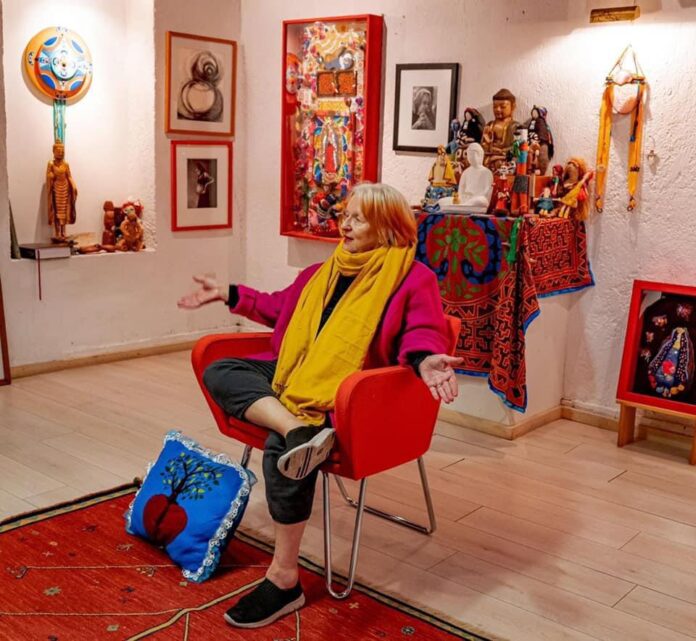 Kiki Suárez is a prominent German artist and psychotherapist, who came to Chiapas just over forty-three years ago. Today she is an icon of the creative community.

San Cristóbal de Las Casas, Chiapas.- Kiki Suárez is a prominent German artist and psychotherapist who calls herself a love anarchist. Restless and fearful, as a child, she faced the challenge of understanding who she was and where she came from.

“Sometimes the pressure from the world was so great that I couldn’t go out of my room to the street for a week. And since she was good at school, there weren’t many repercussions. I chose to study psychology, I also studied literature and education, because I didn’t know if I wanted to be a teacher or a psychologist. When I graduated as a psychologist I said “I want to go very far from my own culture, I want to go to another culture completely so as to look at mine from another distance.”

Her passion for travel and interest in seeing her world from another perspective made her main objective was to move to the Middle East, however, a friend convinced her to take a tour of Mexico before immersing herself in India. They arrived in Los Angeles, California in the United States and from there they began a road trip through several cities of the Mexican territory until they reached San Cristóbal de Las Casas in the seventies.

“Arriving in San Cristóbal I met my husband; he had a nightclub, the only good nightclub he had found in all of Mexico. And there I fell in love and stayed for three days in San Cristóbal and I have been here for forty-three years. “

Kiki says that her little knowledge of the Spanish language and the cultural shock that she experienced then, was enough for her to experience depression. In her need to carry out an activity, she found in her home studio some paint cans and brushes that were her accomplices when creating her first painting.

“In the hours that I painted this picture, my sadness left me and I realized that when you paint it is the same as when you write or do other types of art, you are like a goddess because I can invent what I want… I was successful, I met some gringos who began to sell my art for many years in the United States, and suddenly I was already a painter and I had never, ever thought about it. “

Her success as an artist-led her to create one of the first art galleries in the state of Chiapas, being today an icon among the creative community, mainly in San Cristóbal de Las Casas. Her main inspiration is human relationships.

“What fascinates me the most are human stories, the human encounter. And when I see my paintings, until today I have already painted about 2,500 some boys and some older ones, this is what I also paint, the human encounter, small life situations, friendship … We exposed hundreds of international artists and obviously my own art, and the Kikimundo gallery has already become because almost everything I sell there are my printed designs. “

As a psychotherapist, she has also created a support network for those who have had extraordinary life experiences, which are attended by Kiki weekly for free, where many people go, mostly women.

“I started offering self-help groups on the topic of sharing the experience of cancer, disability, sexual abuse and grief and those affected by suicide, once a month each group. And weekly philosophy and reading groups, apart from which I give individual therapies. “

Finally, she said that it is important for her that through art and therapy it is important to remind people that: “life is not only dark, there are also things to be thankful for every day and when we are grateful we become a little bit happier.”