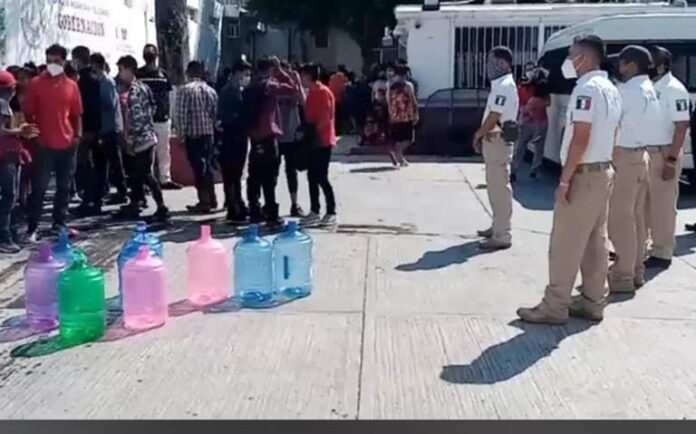 The parliamentary group of the Party of the Democratic Revolution (PRD) in the Chamber of Deputies, asked the Permanent Commission of the Congress of the Union to advocate for migrants allegedly tortured and mistreated by elements of the National Migration Institute (INM) and the National Guard on June 15 at the Siglo XXI Migratory Station in Tapachula.

The PRD fraction requested to send letters to the Attorney General’s Office (FGR), the National Human Rights Commission (CNDH), the Judiciary, the Mexican Commission for Aid to Refugees (Comar), and the Ministry of Foreign Relations (SRE ), so that each one can act in this case according to their legal powers.

“Specifically, the Permanent Office should ask the FGR to investigate the alleged acts of torture, cruel, inhuman, and degrading treatment against the detainees in the EMSXXI, located in Tapachula, Chiapas, in order to impose criminal sanctions on those responsible”, He pointed to the PRD bench.

“The CNDH should also be ordered to investigate so that, within the scope of its competence, it issues the pertinent recommendations and gives a view to the Public Ministry so that it can also act in the criminal sphere,” he added.

The PRD members indicated that the Permanent Commission should urge the Fourth District Judge of the Twentieth Circuit, also residing in Tapachula, to resolve the request for protection from the “Fray Matías de Córdova Human Rights Center” (CDHFMC) in favor of the migrants.

The Comar, meanwhile, should be asked to resolve the international protection requests of the allegedly tortured and mistreated, while the SRE would urge it to review the cases of those who have been repatriated so that the procedure can be reinstated. consider them victims and have the damage repaired.

The PRD Party bench narrated, based on information from the Jesuit Refugee Service and the CDHFMC, that on June 15, men and applicants for international protection detained at the Siglo XXI Station were subjected to torture and ill-treatment.

These people protested that day about the lack of clarity in their immigration processes and their asylum applications, as well as receiving food in poor condition, which would have made them sick.

In retaliation, elements of the National Guard violently dispersed the protest, took the nearly 500 men out into the courtyard while it rained, laid them on their backs, and beat them, for which EMSXXI authorities allowed them to enter after turning off lights and security cameras.

“They didn’t say anything before,” this is how AMLO defends the violent action of the National Guard against migrants

When ratifying that the human rights of migrants will not be violated, President Andrés Manuel López Obrador argued.

He added that his government seeks to apply the law, without violating human rights, “we have succeeded, even yesterday,” he said, referring to the uncontrolled entry of migrants through the southern border, where the National Guard did not intervene to stop them.

He stressed that those who enter the national territory must be registered by the authorities for their own safety, since they may be the target of criminal groups.

“We offer them refuge, human rights, and although it seems contradictory, protection because if we don’t take care of them if we don’t know who they are if we don’t have a registry, they pass and go north and are caught by criminal gangs and assaulted because that’s the way it was. before, they also disappeared ”, alerted López Obrador.