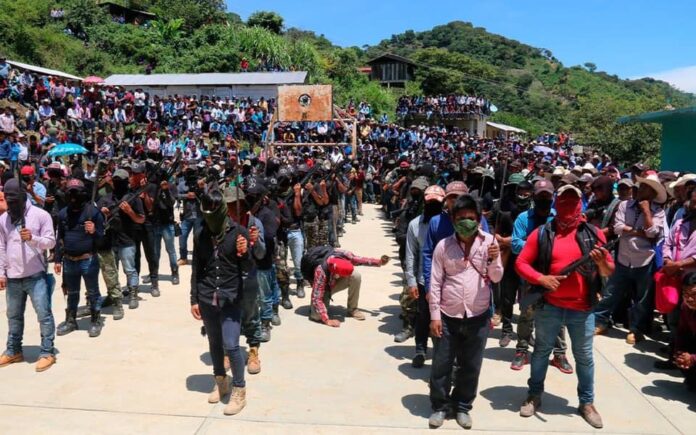 “Another RED spotlight is lit in the country”

🔺The community of San José Buenavista became the meeting place for indigenous #TSOTSILES and #TSELTALES who, in the face of the indifference of the # AUTHORITIES, decided to #ARM to put a STOP! To the siege, they suffer from organized crime.

🔺Not once, not twice have we emphasized it here, the #PRESIDENTE of #MÉXICO ignores the seriousness of the matter.

Chiapas, Guerrero, Michoacán, Oaxaca, Veracruz, Jalisco, Tamaulipas, Baja California, Nuevo León, Chihuahua, Colima and many other states in the country, states that suffer the onslaught of freedom with which the organized crime is prevelant.

🔺The most serious thing about the matter is that thousands of indigenous people joined to give support to the new #SELF-DEFENSE, they got tired of being #IGNORED.

🔺 They blew up houses, burned down houses, cars, and trucks, looting, sowing horror, killing these innocents, and taking their lives and belongings.

🔺In the #MACHETE community, they found artisanal bombs with high explosive impact, which started this horror story.

Surely the government, like Pontius Pilate, seeks to get rid of the problems that only you have to solve.

Chiapas: self-defense groups ignore authorities and will choose their own

Indigenous people from 86 communities in Pantelhó, Chiapas, announced that they will elect their own municipal authorities in accordance with customs and uses.

In a meeting held by representatives of the 86 communities of the municipality of Pantelhó, in the town of San José Tercero, they indicated that in the face of what they consider to be a narco-government, both the current mayor Delia Janeth Velasco Flores and the elected mayor, Raquel Trujillo Morales, they do not recognize the legitimacy of the current and incoming administration.

For this reason, during this meeting, which managed to summon just over 3,000 people, they agreed that they will continue their struggle to obtain peace and justice for their almost 200 “dead brothers” over 20 years, in which armed groups linked to drug trafficking have caused terror in the region.

They also indicated that despite having made various complaints to state and federal authorities about the presence of these criminal groups, which have murdered hundreds of indigenous people in that region, they decided to form a self-defense group, the origin of ” El Machete “, who, they say, seek peace in the region.

This Sunday at least 100 elements of this armed group appeared publicly, hooded, with machetes and firearms, who affirmed that they will defend their communities from the attacks they have suffered at the hands of drug traffickers.

Also present at the event was the head of the Commission for Dialogue with the Indigenous Peoples of Mexico ( Cdpim ),  Josefina Bravo, who stressed that she will carry this message from the indigenous peoples of this area, in addition to the provision of roundtables working with the purpose of solving this problem in Pantelhó.

In addition, they demanded an audit of the current mayor and jail for the elected mayor for being allegedly linked to drug trafficking, in addition to the annulment of the election, to form a municipal government by uses and customs.

The violence worsened after the election day of June 6, where Raquel Trujillo Morales, husband of the current municipal president,  Delia Janet Velasco Flores, won the election.

The issue was addressed at the State Coordination Table for Peace and Security, on July 7, where an alert was issued, which was attended by the commanders of the military forces of the Secretariat of National Defense and the National  Guard.

The National Guard settled in Chiapas; even, upon reaching the municipal seat, they inhibited an attack organized by a group linked to organized crime.

Since then, the military forces planned the unblocking of communication routes and began with the reestablishment of order and the electric power service, with which the gradual return of displaced indigenous people to that area began.